Looking for orthodontics, Invisalign or clear aligners in Melbourne? Crooked teeth? Problems with your bite? Dr. Diluni Perera at Mulgrave Dental Group has extensively studied and qualified in the fields of orthodontics. She has undergone training with world renowned orthodontists and practices both traditional braces and clear aligners options.

Orthodontics provide a dental solution for common issues including crooked teeth, a bad bite, gaps between your teeth, teeth that stick out, and even problems breathing, chewing, or speaking.

Depending on your requirements, we will tailor an orthodontic treatment to help straighten your smile. Whether that be traditional braces, Invisalign or even clear coloured braces, finding the best solution for you will always be our number one priority.

Here at Mulgrave Dental Group, our orthodontic solutions are suited to all ages from children, to teenagers and adults. It’s never too late to straighten to your teeth and get feel confident in your smile.

It’s never a good feeling to have to hide your teeth each time you smile. A crooked smile will not only affect your confidence but your mental, emotional, and social health as well. Fortunately, with our cosmetic dentistry techniques, you can recover your beautiful smile and take advantage of every opportunity to fulfill your potential in life.

Braces, Invisalign Clear Aligner Before and After

This patient wanted to fix the crowding of teeth. This outcome was achieved in just under 6 months.

The patient was not happy with her narrow asymmetrical smile. This outcome was achieved in 12 months.

The overlap of the front teeth was a big concern for this patient. The uneven smile was impacting his confidence. Treatment was completed within 9 months.

The patient's tooth was impacted in the jaw and had to be brought into the correct position. The treatment was completed in 18 months.

The patient was self-conscious about the crooked and uneven teeth. The complete result was achieved in 18 months.

Crooked teeth don’t just cause embarrassment. Misaligned teeth can cause pain, affect your speech, even interfere with chewing and digestion.

Tooth-straightening treatment by Mulgrave Dental Group in Melbourne resolves and prevents the problems that misaligned teeth may be causing in your life. Get your questions answered so you can start smiling again. 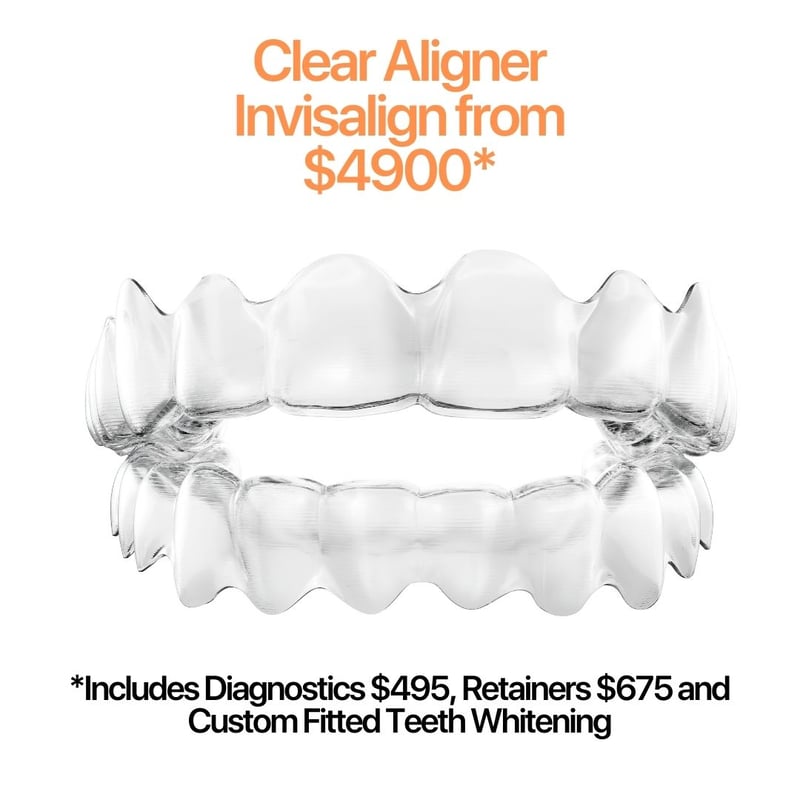 Mulgrave Dental Group is located off Monash freeway in the suburb of Mulgrave 20 minutes from Melbourne CBD. Our dentists attend regular training programs and obtain qualifications to provide cosmetic dentistry services at the highest standards. We aim to provide the best cosmetic dentistry in Melbourne using advanced technologies.

What Are My Teeth Straightening Options?

The two options to straighten teeth are traditional braces (also known as metal braces), and aligner treatment. Treatment with orthodontics and clear aligners is often necessary to fix issues such as gaps between teeth, overhanging top teeth (known as an overbite), and crooked bottom teeth.

Traditional metal braces straighten teeth through a series of brackets and wires. The brackets are attached to your teeth throughout the entire course of treatment. Adjustment requires a visit to your dentist’s office.

Invisible aligners, commonly known as Invisalign, straighten teeth with clear teeth aligners. The aligners, which consist of an upper and lower tray made from clear, BPA-free plastic, are constructed through the use of 3D printing.

A digital scan and teeth impressions are used to custom-generate a series of trays. The first tray is a close match to your existing smile, while the last tray represents your finished results.

There may be as few as six or as many as 48 trays in your treatment plan. Each tray is generally worn for one or two weeks.

Treatment consists of wearing the trays for a specified amount of time, most commonly 22 hours a day. Some clear aligners are designed to be worn only during nighttime; this generally prolongs the course of treatment. Each set of aligners exerts continuous pressure on the teeth, resulting in small tooth movements.

The aligners are easily removable. They must be removed whenever the patient eats. Hot beverages may not be compatible with all invisible aligners. Beverages such as coffee or wine can result in staining.

One benefit of removable clear aligners is that you can still brush and floss as normal. Treatment times are variable, with the average length of treatment around one year.

Which Is Better, Invisalign or Braces?

The best treatment plan for your situation can be determined through a visit to our dental practice in Melbourne.

Clear teeth aligners such as Invisalign braces are more discreet than metal braces.

Many patients find aligners to be more convenient than metal braces. They will not require a change in your existing tooth cleaning routine. Treatment can progress without frequent visits to your dentist.

Does Invisalign Work On Gaps Between Teeth?

Yes, clear aligners can fix a gap in your teeth. Spacing issues can create pockets where food and bacteria accumulate, affecting your dental health. Teeth gap-filling treatment with invisible aligners straightens teeth while moving them closer together, closing the gap.

How Much Does Invisalign Cost in Australia?

Orthodontic treatment with Melbourne made clear aligners is an investment in your long-term health.

The treatment cost of Invisalign and teeth aligners in Melbourne and Australia depends on factors such as:

Clear braces cost slightly more than traditional braces. Most patients find the discrete nature of invisible aligners, along with the decreased need for office visits, to be well worth any extra cost.

Does Invisalign Work On Overbites?

A severe overbite, also called a malocclusion, can cause premature wearing on teeth and even jaw pain. Invisalign overbite treatment and overbite braces move the teeth into the correct position, preventing wear and relieving pain.

Overbite correction with invisible teeth aligners sometimes requires the use of attachments. An attachment, or button, is a small piece of precisely shaped and sized dental material that attaches to your tooth during the course of treatment.

These attachments or buttons allow the dentist to customize the direction and amount of pressure on individual teeth, encouraging them to move efficiently into the correct position. They also help the aligner fit snugly onto the teeth.

The material is tooth-coloured but may be visible to others during close contact. Attachments are not required for all cases.

How Can I Find Clear Aligners In Australia?

Do you have payment plan options for orthodontic treatments?

Mulgrave Dental Group is located off Monash freeway in the suburb of Mulgrave 20 minutes from Melbourne CBD. Our dentists attend regular training programs and obtain qualifications to provide cosmetic dentistry services at the highest standards. We aim to provide the best cosmetic dentistry in Melbourne using advanced technologies.

Our focus is to listen to your needs and cater the treatment that suits your needs.

We understand that when you have decided to start the treatment you do not want to wait 3 to 6 months to start. We are committed to start your Invisalign clear aligners treatment within 10 working days after you accepted the treatment plans. We provide a one stop solution for all your dental needs.

Mulgrave Dental Group is in Melbourne’s southeastern suburb Mulgrave. We are located at 47 Wanda Street Mulgrave 3170. If you are traveling by car, take the Wellington Road exit (Northbound or Southbound) on the Monash freeway.

You can access our dental clinic by public transport as well. Please call our friendly team on 03 9562 5156 to find out exact details depends on where you are travelling from.